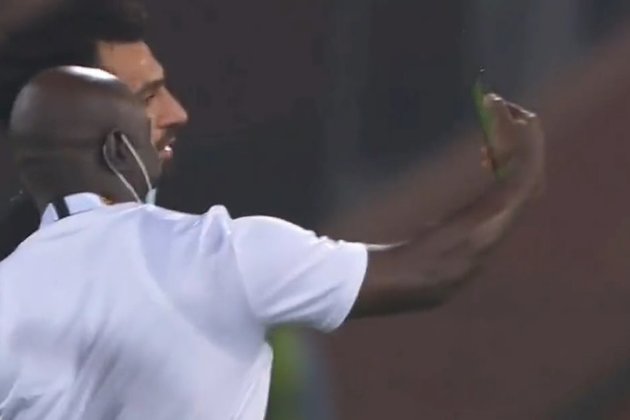 A member of Nigeria's coaching staff has made headlines for grabbing a cheeky post-game selfie with Liverpool star Mohamed Salah at the Africa Cup of Nations.

Record seven-time winners Egypt got off to the worst possible start in their opening Group D match at the State Roumde Adjia in Garoua on Tuesday.

Disappointing with their star man Salah restricted to 35 touches, two dribbles, and just one memorable shot, which was blocked, they were beaten 1-0 by Nigeria thanks to a strike on the edge of the box from Leicester City's Kelechi Ihenaho on the half-hour mark.

But as is so often the case, the 29-year-old Salah was a good sport at the final whistle.

Clearly dejected, he still had time for a member of the Nigeria coaching staff who collared him walking off the pitch after shaking hands with members of the opposition.

With his phone in hand already, the man was evidently prepared to make his photo request of the continent's biggest name, which Salah willingly accommodated.

Even putting his arm around the fan and his hand on his soldier, the Ballon d'Or hopeful showed class in defeat.

"Salah is an adorable guy. I admired the sportsmanship displayed... it's all about uniting the continent," gushed one fan.

While most people found the Nigeria coaching staff member's request "hilarious", not everyone was impressed and some deemed it "unprofessional" or in poor taste considering that the Super Eagles had just won a big match and he should have been celebrating with his own players instead.

"He's a superstar, I don't blame him," pointed out someone else, though.

"People laughing at the man, don't act as if you won't ask Salah for a selfie if you had the opportunity to have one," remarked a separate party.

Elsewhere, Salah was attacked for his overall display on social media.

"Salah seems useless without his Liverpool squad," it was suggested, with the forward bagging 23 goals in 26 appearances for the Reds this season before heading to Cameroon, and widely regarded as the world's best in-form player by respected figures such as manager Jurgen Klopp.

After Guinea-Bissau drew with Sudan 0-0, pointless Egypt are now bottom of the group and need Salah to recover his club momentum if they are to stand any chance of advancing to the knockout phase.

On Saturday, they face Guinea-Bissau in the first of two easier fixtures compared to the prospect they faced in Nigeria.

Unlike the Euros, there are no soft passages to the next round for the strongest third-place finishers, and Salah could be back in action for Liverpool as soon as a January 23 away trip to Crystal Palace in the Premier League if his nation cannot rise out of their slump.