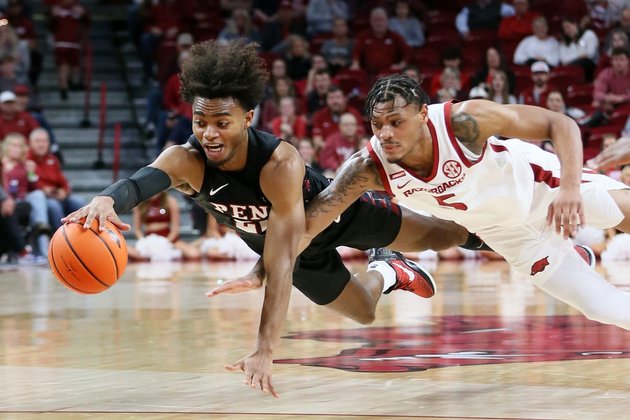 JD Notae scored a game-high 28 points, grabbed nine rebounds and dished out five assists Sunday as No. 13 Arkansas built a 22-point second half lead and cruised to a 76-60 win over shorthanded Penn in Fayetteville, Ark.

Stanley Umude added 19 points and Au'Diese Toney chipped in 12 for the Razorbacks (6-0), which made 50.8 percent of their field goal attempts and outrebounded the Quakers 44-28. That made up for committing 15 turnovers.

Dingle's absence was notable across the board for Penn. It made just 36.8 percent from the field, including a dismal 7 of 27 from the 3-point line. Its other nine players who saw action aside from Slajchert and Monroe managed just 21 points.

But the Quakers were able to hang with Arkansas until the start of the second half, when the Razorbacks ripped off a 12-1 run to double an 11-point halftime lead. Umude's 3-pointer off an offensive rebound by Jaylin Williams made it 49-27 with 15:50 left, a margin Penn wasn't going to erase no matter how hard it tried.

Monroe's foul shot with 4:11 left enabled the Quakers to edge within 66-56, but Notae rattled off eight straight points to wipe out any possibility of a miracle rally.

Arkansas led nearly the entire game and was never in any real danger of losing, but the Quakers were able to stay in contention. When the Razorbacks assumed their first double-figure lead at 27-16 on Toney's turnaround jumper with 5:57 remaining in the first half, Penn worked its way within 32-24 on a 3-pointer by Slajchert at the 1:43 mark.

But Arkansas had the last say in the form of Notae, who converted a short jumper after a Quaker turnover as time expired to give it a 37-26 cushion at halftime.